Published in the Groove Guide – March 2012

As the elders of the British pop scene, UK act Elbow score truck loads of Mercurys, regularly donate material to the Warchild foundation and jam with choirs and orchestras.  But really, they’re just a bunch of parents worried about the economy and whether their babies will sleep through the night.  When I call up keyboardist and producer Craig Potter, he’s just put his two down, and is still whispering over the phone, lest one should wake unexpectedly.  I ask how it feels to be a regular parent and a musician who tours the world.   “I s’pose it’s like a businessman who travels.  I’ve got two and one on the way, so the idea is quite normal to me.”

Lead singer Guy Garvey met Potter and his brother and guitarist Mark Potter at Stand College in 1990, at the age of the tender age of 16.  “Back then, we were called ‘Mr Soft’.  With a name like that it could have been a very short career!”  With drummer Richard Jupp and bassist Pete Turner also on board the band took on their local, The Corner Pin pub in Stubbins, Manchester.  “We were really young and naïve back then, no clue.  But even then I knew this is what I wanted to do with my life.”  By 1997, they’d changed name to ‘Elbow’, quoting Philip Marlowe from TV show ‘The Singing Detective’ (the word “elbow” is the most sensuous word in the English language, apparently).  The name change also brought about a maturity to their song writing and opportunities including a deal with Island Records.  Long story short, they were dropped, product and all when Universal bought out the label.  “You can imagine how heart breaking it was.  But it gave us strength and breath.”  To the label’s chagrin, they returned a few year’s later with Asleep in the Back, which scooped a Mercury Prize and set up their reputation for unique deep, moody Northern Soul.   In time, it also gave the band the guts to take control of their own work.  Potter now produces their work and has presided over their last three: Leaders of the Free World, The Seldom See Kid and Build a Rocket, Boys.  The last, Potter is particularly proud of.  “It’s Guy’s take on what it’s like growing up on the street.  I have kids of my own, now.  We just bought a place in a little cul-de-sac and it’s great to let the kids ride around.  There’s some space to do that.”  And indeed space what was needed in their latest release.  The new one contains the track, ‘Lippy Kids’, Garvey’s reply to the inner city kids at the end of the street.  With wisdom of a new parent, many years from his own child hood he bates the youngsters to give up their video games and get outside: build a rocket, boys – as he may have at that age.

There was also plenty of space afforded at the band’s Manchester studio, ‘the elbow room’.  The aim was to create stripped back music, “which for us, given our symphonic inclinations, is a remarkable thing.”  Potter is modest about his producing reputation.  “I only think it’s fair to demand that every note is there for a reason.  We need to be able to play live what we do in the studio.”  That said they’ve done some wondrous gigs over the years like using the crowd from their Glastonbury appearance as extras on their second major release “Cast of Thousands”, and jamming with the BBC Concert Orchestra at Abbey Road (check out the Youtube clip).  “I think that was a career highlight, to bring together all that (the songs from ‘Rocket’) with only one day’s rehearsal we were dead nervous but you can see they all enjoyed it”.

The upcoming tour extends beyond Australia to take in Auckland.  Despite living in Manchester all their lives, Potter is secretly looking forward to the trip.  “Here, it rains all the time.  That’s why there’s so many bands here.  We’re indoors a lot.  But I’m looking forward to some blue skies!” Let’s hope he hasn’t been checking our weather news lately! 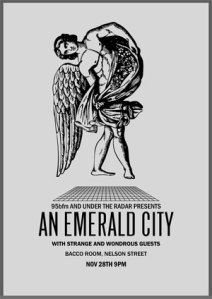 Yes, the rumours are true. New Zealand’s most un-classifiable, most experimental and beloved orchestra of vivacious creativity An Emerald City are calling it a day – at least for now.  Tim Gruar talked to multi-instrumentalist and founding member Sam Handley about the amazing journey.  He disputes that the band will actually shut down at the end of this summer’s gigs.   “The band is splitting for now.  With members spread all across the world it’s just too logistically difficult to operate at the moment…(and) you’re right it’s a bit like a theatrical production – we all come together to put on a show or to make and album.”  Handley himself, is planning to head back to Berlin, where the band’s latest album The Fourth, was recorded.  He describes the city as “really magical, an inspiring place full of musicians, artists and a great underground scene – and pretty cheap, too”.  Handley suggests that recording there is more than just tapping into the cold war darkness and austerity present on 70’s albums by Bowie, Iggy Pop, U2 and Lou Reed.  He plans to work on a variety of projects including some “ambient inspired” synth music”, videos for friends, a short film script and in collaboration with band member Rueben Bonner, a children’s fantasy story.

‘Being there’, for An Emerald City is an essential component of this band.  The first album was recorded in the great cave of Whatipu amongst the black sand of Auckland’s isolated west coast, an idea Handley got whilst exploring the rocks out near Whakatipu.  With much lugging of equipment, generators and instruments, the band set up camp to record from Go! to whoa!  “Our live shows were always about enjoying our selves and doing what we wanted so they were experimental, we didn’t want to follow any formulas.  Recording in the cave was the same – doing it for fun!”

The band had been playing as a 6 piece since 2005 combining Eastern traditional instruments and psychedelic leanings. Songs were created a menagerie of instruments including a Persian long necked lute, daabuka, and percussion “found from various reaches of the universe”.   Early support from student radio, especially Mikey Havoc (bfm) got them well earned attention and eventuated in a big year in 2009 with stand out performances at Auckland’s Big Day Out, sold out shows, top 40 Chart placements and critical acclaim for Circa Scaria.

Constant psychedelic influences and the relocation to one of the world’s most beautifully bizarre cities, Berlin, further fuelled the creativity and lead to the acid, eastern, experimental psychedelic post rock of The Fourth.  It was recorded in a former communist radio station, on the East Berlin’s river Spree), a location rumoured to a Stasi secret polices headquarters.  Handley remembers the huge, well appointed space and exploring the dark corridors after hours “in the darkness, there was a kind of strange energy.  I couldn’t describe it, but it certainly influenced us. Also, the snow surrounding Studio East while we drove in to record every day was eerie, thrilling, like a foreign film set.”

By late 2010 it was getting harder to keep together, with commitments pulling members in various directions.  Recruitments filled in temporarily, and a move back home allowed time to pull together for one last spurt of activity, including a “stunning show” in Dunedin and satisfying family affair in Paekakariki.  These may be the last shows, but don’t rule out a return at a future date – maybe!